In Memory of Tom Duddy 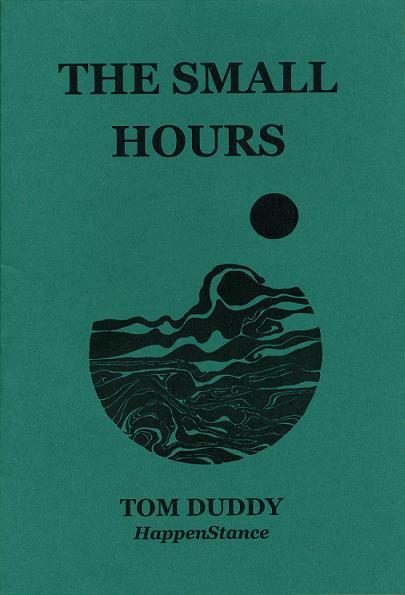 It was terribly sad to learn from Nell Nelson earlier this month that the poet Tom Duddy﻿ had died. His excellent pamphlet, The Small Hours, was published by HappenStance the year before my own. It was a mark of the man that when I asked him to sign my copy of his pamphlet, back in 2008, he wrote 'Thanks for asking!' at the top of his message. His poems everywhere convey his human intelligence, and I'd recommend them to anyone. HappenStance will be publishing more of his work, I know, and in the meantime, there's his website. He's a poet and a man worth remembering.

I post here, in his memory, the opening poem of The Small Hours, which feels apt, and captures something of his signature insight.

We're laughing already at the thought of someone
whose accent and mindset we have to a T.
And this is how the night will pass, since no-one
will have the heart to say how they are, exactly.

What I'm feeling tonight is not grief, exactly,
(since all those close to me are alive and well),
yet a feeling like grief is earthing me to the floor
in the darkness beneath the rollicking table.
Posted by Gregory Leadbetter at 7:47 pm No comments:

Being Human, at the Belgrade Theatre, Coventry


No – this isn’t an entry about a vampire, a werewolf and aghost trying to cohabit, but a performance of poems, selected from the Bloodaxe anthology Being Human (ed. Neil Astley), which I attended last night.


This is not ‘performance poetry’. Instead, a company of three talented actors – Benedict Hastings, Elinor Middleton and Barrett Roberston – realise the selected poems as an integrated piece of theatre. This is a very ambitious and demanding thing for a production to do – but Being Human, produced by Midland Creative Projects, succeeds to vivid effect. The actors avoid smothering the poems with actorishness – always a risk when poetry and acting meet (and I speak as a poet and occasional actor myself). The poems are given space, but they are also (sensitively and without being forced) acted out, as a deftly-handled sequence of dramatic vignettes.


It is beautifully put together. Derek Nisbet’s music and sound design was particularly effective, but the unobtrusive and inventive use of visuals and simple props was well-judged throughout – centred around a table, with Edip Cansever’s poem of that name (in translation from the Turkish) serving as something of a motif for the performance. They also got the length right: there isn’t a slack minute in this production, with both halves engaging the audience’s attention without ever exhausting it.


The performance stays true to the pervasive feeling of the anthology itself, which achieves the cumulative emotional acuteness it has by placing together lifetime perspectives condensed into poem after poem – a form precise enough to capture irreducible and fugitive truths, in ways concise enough for consciousness to absorb.


Most admirably, perhaps, the production manages to become more than the sum of its parts. The chosen poems are given greater resonance here than they might otherwise achieve, through their orchestration in this setting.


The experiential analogy between poetry and theatre plays a fairly fundamental role in my thinking as a writer, as this website will no doubt reveal further in due course. So, as a dramatic form that successfully bridges poetry and theatre, work of the kind and quality on show in Being Human is very welcome – and the possibilities are endless.


For now, though, go and see Being Human, and see what you think. As well as being on at the Belgrade Theatre on 23 June, it will be touring to the Ledbury Poetry Festival (1 July), Bury St Edmunds (9 July), and Birmingham, Durham, Folkestone, London, Ludlow, Swindon and Uppingham in October: see http://livepoetry.org/.
Posted by Gregory Leadbetter at 5:08 pm No comments: