Not very long ago, I went with some friends to Peter Burke’s new exhibition of sculpture, Earthworks, at the Victoria Art Gallery, Bath. I didn't know much of Burke's work previously - though what I had seen I'd liked. Earthworks delves into the soil to bring the visitor closer to their own clay, confronting them with a range of unsettling forms and figures – heads, faces, hands, feet, backs, and torsos – hand crafted in bonded earths, all drawn from land within a twenty mile radius of the city of Bath. ‘Of Landscape’, a series of steel-framed faces that blurs the delicate boundary between the death and the life mask (see the example in the picture above), beautifully reveals the diversity of colour and texture under our feet – the smooth warmth of Sandridge soil vying with the fibrous matter of Wansdyke and the bone-white chill of Westbury chalk. In fact, the works in chalk, each with their unique filigree fault-lines, are among the most successful and suggestive of the exhibition. An untitled piece, comprising over a square metre of bonded chalk, with a displaced chalk face-mask boxed into its depth, put me in mind of brain matter – the figure of a thought waking in some earth-bound sleep. There are shades of Rodin’s ‘Thinker’ everywhere – but, as in the piece ‘Of the Hills’, consisting of a chalk head, cracked, split and incomplete over a steel frame, Burke’s sculptures imply a more disturbed state of mind, that often belies the look of calm on their many faces. If his materials imply the fragility of the human forms into which they are moulded, however, they also touch on their metaphysical resonance: one piece, called ‘Ritual’, is formed of two dozen feet, formed of bonded chalk, walking, as it were, in a circle that leads out from the gallery wall and back into it. That sense of the ritual significance of our relationship with the earth - something close to my own work in poetry - pervades the exhibition.

Although the exhibition has now finished, it's well worth having a look at Burke's webpages, via the link embedded in his name, above.
Posted by Gregory Leadbetter at 11:36 am 1 comment:

Ian Marchant: Something of the Night 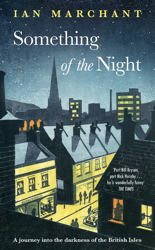 The only clues to the skyline, as I look out of my window just now, are the tracers of distant street-lamps; the rest is darkness, and the glass-ghost of my own reflection, peering back at me. I’ve just finished reading Something of the Night, by my colleague at , Ian Marchant. Part memoir, part exploration of life after dark in and , the book is a night-scope through which the author’s own richly populated history comes into view. Framed by the story of an all-night session in the wilds of , it’s stowed full of companionable and often hilarious anecdote, and this in itself is a good enough reason to buy and enjoy it.

I could happily linger here on the true comic touch that buoys the narrative from start to finish. But in the end, the book doesn’t let its readers quite settle in that way. There’s a metaphorical force at work throughout its night-wandering, and a confessionalism rooted in the Protestant tradition of personal reckoning – complete with a between-the-lines redemptive structure. There’s something at stake in the humour here: a knowledge that comes from having come through. And as the book goes on, one realises that it has been haunted by something from the beginning: death. I think it was Saul Bellow who wrote that death is the dark backing that a mirror needs if we are to see anything. By the end of Something of the Night, death has indeed become a medium of vision.

But before anybody gets the jitters, let me say too that Something of the Night is also a joyful portrait of a certain kind of omnivorous intelligence – alive with Marchant’s inclusive interests and humanity. Like Thomas De Quincey in Confessions of an English Opium-Eater, he could fairly claim Terence’s dictum, humani nihil a me alienum – ‘nothing human is alien to me’ – as his motto (and more truly than De Quincey, perhaps). Like De Quincey, Marchant is a philosophic life-writer – in whose work the experience of transgression mixes with that of wonder and laughter. Something of the Night also has its poetry fix: it is set off with a line from George Herbert, and Catherine Smith’s fine poem ‘Night’ (with Catherine herself featuring in the episode on Lewes Bonfire) – and Larkin is never too far away, beckoning from the shadows. It’s a treat of a book.
Posted by Gregory Leadbetter at 10:57 pm No comments: