The Mystery of Nature and the Nature of Poetry 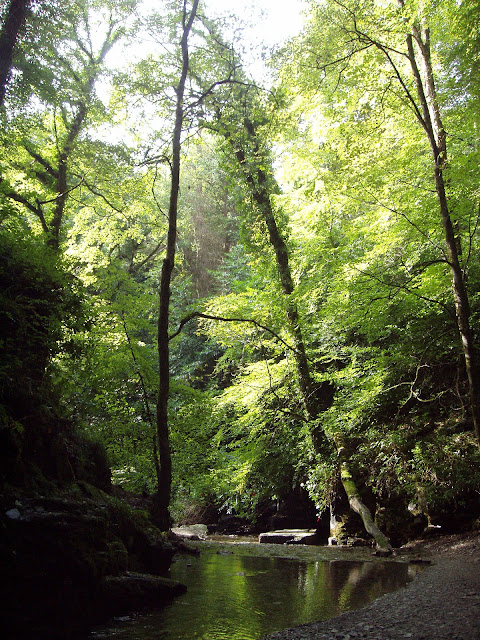 Speaking on the subject of ‘Writing Outdoors’, at the Writers’ Toolkit, Birmingham in November, I took as my texts extracts from two poems, as examples of guiding wisdom:


many a poet echoes the conceit;
Poet who hath been building up the rhyme
When he had better far have stretched his limbs
Beside a brook in mossy forest-dell
By sun or moonlight, to the influxes
Of shapes and sounds and shifting elements
Surrendering his whole spirit, of his song
And of his fame forgetful!


The eye it cannot chuse but see,
We cannot bid the ear be still;
Our bodies feel, where’er they be,
Against or with our will.


Nor less I deem that there are powers
Which of themselves our minds impress,
That we can feed this mind of ours
In a wise passiveness.


Think you, ’mid all this mighty sum
Of things for ever speaking,
That nothing of itself will come,
But we must still be seeking?


During 1797-98, Coleridge and Wordsworth spent a good deal of time doing just the kind of thing they wrote about in these poems: surrendering themselves to the ‘influxes / Of shapes and sounds and shifting elements’ of the Quantock Hills, in Somerset – placing themselves in the presence of ‘powers / Which of themselves our minds impress’. Reading Coleridge and Wordsworth in my teens, I recognised in them an authoritative utterance, the voice of a tradition, that spoke to my own experiences of a related order – experiences fundamental to my imaginative life, and hence to my own poetic impulse.


Going into a wood, spending time by a lake, or walking through country, quietly dislocates the social norms and habituated patterns of urban or suburban domesticity. You don’t necessarily have to go far for this – as Marvell wrote, in that impeccable line, a garden may yield ‘a green thought in a green shade’. It doesn’t require a wilderness for world enough and time to activate the latent senses, and stretch them into a state of wakefulness: watching, listening and alert, open to the constant surprise of other life-forms – a conducive state of mind in which to gather invisibly the matter of a poem.


Crucially, the ‘wise passiveness’ Wordsworth describes isn’t entirely passive. It is ‘wise’ rather than random because it involves an active exposure to the influences of things which are not human, but are no less alive. That mingling of presence, in ourselves, of what is human with what is other than human, is the living mystery of our being in the natural world: the conundrum, at the very root of our consciousness, of our connectedness and differentiation at one and the same time. Because its influences are infinitely more various and subtle than we can know analytically, direct experience of nature – the world we have not made – is irreplaceable; its comprehensiveness cannot be artificially reproduced. (The brain can only be tricked by ‘virtual reality’ – how dated that term already appears! – at the expense of authentic experience.) In the metaphysics of presence that I am sketching, to expose the self to the natural world is to invite encounter with the unknown. And it is in these conditions that my own poetic imagination thrives.


None of this is to deny the genius loci that the built environment can conjure up, of course – but that encounter with other life-forms, beyond the human, is especially important to me.


Given Wordsworth’s observation in the first of his stanzas I quote above, it follows that we should be careful, and sometimes deliberate, about the influences we expose ourselves to – especially writers and artists, who are usually unusually impressionable. It seems so obvious – and yet this is rarely explicitly acknowledged as the key educational principle it is. ‘We can feed this mind of ours’ – and we should take charge, as a matter of course, of what it feeds upon.


There is a qualitative difference between the influences to which we might be exposed, or expose ourselves. Taken out of its context in the poem, opening oneself up to ‘things forever speaking’ might presently suggest surrendering the sources of our behaviour to a consumerist delirium led by remote-access media – and let’s face it, we don’t have to look far to see the threat of something like that. But Wordsworth, of course, was writing about the world we have not made – the world of non-human life to which the human belongs, and of which, for all our science, for all its everyday, familiar proximity, we know next to nothing. And that world is the very opposite of remote-access media delirium. It’s a truism that too much time in front of any screen risks rendering mind and body genuinely passive, by subduing (and obscuring) aspects of its own, inner activity. The ‘wise passiveness’ of Wordsworth’s poem – opening the self to the presence of the non-human life with which we share the earth – tends to activate mind and body: to feed, nourish and arouse their powers.


For me, that order of wakefulness and alertness is akin to the inward silence in which poems rise, and the real thinking gets done. It is a fusion of excitement and concentration, at once urgent and peculiarly relaxing, where the flow of the mind lifts the pulse and the whole body becomes an organ of intensity.


So – and this, really, is my point – that immersive attentiveness to non-human life is analogous to the writing of poems, for me. Composing a poem involves listening with language for what is waking, within us and for us, as something there: invoking unrealised influences and intuitive affinities, giving them sound and shape through the warp and tact of words, achieving the cold fusion of which only the imagination is capable: certitude in mystery – an experiential knowledge, radiant with the enigma of living presence.
Posted by Gregory Leadbetter at 2:00 pm No comments:

Further to my earlier post about its shortlisting, I'm delighted to say that Coleridge and the Daemonic Imagination has been awarded the CCUE Book Prize 2012 - a prize for the best scholarly book in the field of English studies by an 'early-career' academic. It was lovely to be able to collect the award in person at the Senate House, at the University of London, yesterday. Thank you, CCUE.
Posted by Gregory Leadbetter at 11:48 am No comments: