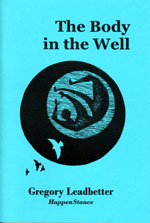 ‘a magical and poignant debut’ ~ Kirsten Irving, The Round Table Review

‘very distinguished – so deft in language and imagery, so unique and constantly surprising’ ~ Keith Sagar, author of The Laughter of Foxes: A Study of Ted Hughes

‘Every once in a long while, a poet climbs from the deep well of “otherness” where Alice fell and offers us a glimpse of that rarely seen shimmering upside-down world, so necessary if we are to understand – and love – our more mundane stumbling lives. Gregory Leadbetter is one such poet. The language in the poems collected together in The Body in the Well – often lyrical  and deeply felt, sometimes wry and whimsical – keeps us floating inches from solid ground but intensely aware of the proximity of the sharp edges of the real world. Leadbetter has taken basic concepts of physics – resonance, oscillation, and tuning –and translated them to lyric…Leadbetter’s poems are often marked by such small graceful intimacies that trigger harmonics capable of opening the heart while revealing the delicate instability of our 21st century world. The resonance of the familiar with the unknown reminds us of the joy of feeling alive in a human world where science is buoyed by art.’ ~ Tia Ballantine, Sphinx

‘...he writes so freshly, so well, I greatly enjoyed this first book’ ~ Roddy Lumsden, Books from Scotland

'These poems insist on being heard. They are strange, haunting and beautifully complete...They communicate through words but also beyond words' ~ Helena Nelson, editor of HappenStance


The Body in the Well is, Helena tells me, now sold out - but copies are still circulating in the aether.


The Body in the Well

Even here, where the aquifers are spoken of
with a reverence strangers save for cathedrals,
it’s rare to find a house like this, three stories
of gleaming limestone raised like a lantern
out of the rock, lit like a match when struck
by the stone of the clear moon, a pale flame.

The locals say the house was a dream of his,
climbing like a pyramid month on month:
building it was a way to forget. Make
this dream your own, the auction-catalogue
tells the buying public. The property
includes a well follows in a quieter font.

He would listen at the mouth in the floor
of the cellar, patient for the voice of the dark
in the sound of the stalagmites rising.
When he fell into its echoing heart
the waters gathered him with their song
and here, he remembered everything.

I bought him a drink for all the old times
and prepared for an evening over his shoulder.
From a distance I saw his life as a comedy,
laughed at the anguish that ran through his face
as he caught himself at it again: chasing
the hare through the eyes of strangers, exhausting
himself on a scent that led him a dance.

I felt the air shift when she came towards him.
As if marked by a sign, they were a pair
before they knew it. I gave them my blessing.
He followed her as she slipped into him.
I watched them talk and saw it running
between them, its eyes there in a glance
then gone, its ears alert to the hunt.

They felt its heartbeat flutter in theirs,
sure they had it caught, though I knew better.
He kissed her, as if for the first time
feeling for proof in her lips and her skin,
innocent of the hare cocked for the leap
back to the wild: when he looked in her eyes
I saw my reflection double and run.

You might see them almost hovering
at a point of utmost clarity,
heads tilted to the pitch, hung
like candles attending the dark,
each a flame sucking the air:
men and women, sometimes a child,
balancing over the gulf
of entropy, the loss of that feedback
from the earth and its suspension
they make it their calling to find.
They live for the sudden
flood of wakefulness
entering the base of the skull
that tells them they have tapped
another blossoming seam
or limitless well, and here they tune
to the brain feeding, the flint
of each connecting fire.
They say that reality gathers
where it falls open; that this event
is resonance. They do not try
to predict co-ordinates for its disclosure
but cultivate a weather-sense
for when and where the waves might
rise in a bore along the spine.
And any place may do. Even
the stillness of this room.