Contemporary Poems in a Shakespearean Soundscape: An Experiment with 'Original Pronunciation' 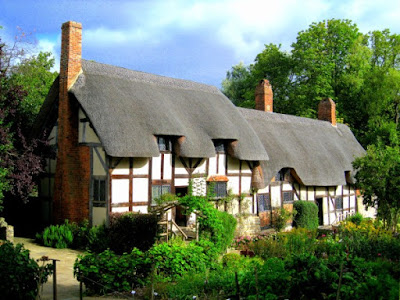 This year I have had the pleasure of being poet in residence at Anne Hathaway's Cottage (pictured), as part of Stratford-upon-Avon Poetry Festival.

In some of the new poems that I've been working on, I conducted an experiment that, as far as I know, has never been tried before. Inspired by David Crystal's research on the sound-system (or phonology) of Shakespearean English - known as Original Pronunciation (or OP) - I have composed new poems in OP, rendered on the page phonetically, in the manner of dialect verse.

Why? For a number of reasons. The phonology or sound-system of any language has operative effects akin to music - and the attempt to invoke and direct the energies of those effects is fundamental to my practice as a poet. I wanted to release and make more vivid through OP some of the more latent qualities in the English that I use every day. And the peculiar quality of OP itself, in which people from all parts of Britain and the Anglophone world hear something of their own voice blended in strange yet familiar patterns, transcending the false borders bred into us, has a political appeal for me, too.

Elizabethan literary taste valued fresh imaginings of familiar tales: as we know, Shakespeare took up well-known plots and made them something more than the stories they told. I decided to do the same with my experiment in OP - and I knew who I wanted to hear speaking this language.

I present below the first two parts of a five-part OP sequence with this working title: 'Caliban Retaurrns to the Uylund'.

After the events of The Tempest, Caliban is taken to Milan, to live as part of Prospero's household ('This thing of darkness I / Acknowledge mine') - but twelve years on, Caliban has been sent back to the island, entrusted by Prospero with a secret task.

I beach on a waihve and laff in the wash:
I wearr the jelluyfish I caught for a cruwn
with ahl its stings aluyve, still pulsin
luyk the pinches uv ’is spirits did:
such is muy kingship, and I embraihce it.

that’s a riddle that he tohld, hwen fahrrst
he cahld muy muynd to his, as nou I knohw:
I wonderrd at him, and that, his daughterr.
Hwen she taught me speech luyk theirrs, I asked him:


Posted by Gregory Leadbetter at 9:23 pm No comments: