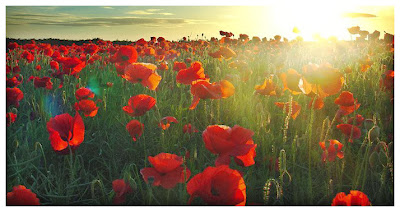 I wrote this poem some years ago, though I have not republished it since its inclusion in the 2004 Arvon Poetry Competition prize-winners' anthology (it was commended in the competition that year).

It recalls the D-Day landings of the last world war - and in particular, the landings on Juno Beach, which were conducted by Canadian and British forces. While we British may grumble that Hollywood renderings tend to focus solely on the American contribution to the assault, the role of Canadian troops tends to be overlooked far more often than that of the British - so one motivation behind this poem was to redress that (however modestly). Nevertheless, the poem is intended to commemorate all of the Allied soldiers who took part.

One of the warships that undertook naval bombardment of the coastal defences ahead of the landings, the cruiser HMS Belfast, is moored in London, on the Thames, to this day - a floating museum.

Like so many of us, my own family was involved in the terrible struggle of that war: my grandfather, who served in the Royal Navy, was twice torpedoed - his ships sunk - but thankfully, survived. The stories that came down from those days are deeply impressed within me, together with grief for what they went through, and awe for what we owe them.


We knew something was up
when they cancelled our leave.
I sneaked a letter out to Evelyn
before they stopped that too.
When they gave us beer
vouchers and French francs –
two hundred to the pound –
we were sure it was on.
We left hidden in a tide
of ships. We didn’t know
our own secret. Thousands
of us, and even God
was in the dark that night.
We crossed the tar-black sea
like a floating constellation
out of synch with the sky.
We lurched on the waves
like drunks, navy strength
rum warming our bellies,
adding its fire to ours.
Some never got their sea-legs
and coughed their breakfast
into the drink with a curse.
We heard the fleet open up
to knock seven shades
out of the enemy’s sleeping
defences. Some of the lads
smiled. I kept my head down.
We blurred out of the English
horizon, crept up on
behind the breakers and I thought,
why Juno? Where did she
come into this? Why here?
Why now? Was this her doing?
And the bullets broke across
the boat, its bow opened,
a one-way ticket to the cross-
fire. A mine lifted two men
into the air and put them back
all wrong. A pit-prop
left to trip the tanks up
was booby-trapped and blew out
the sergeant like a candle.
I ran headlong up a road
made by my own roar.
The earth burst open
here and there and I could smell
the sea, cordite, a dew
of blood. I heard the wounded
boys cheer us on,
and I saw the grey hoods
of bunkers shooting glances
from the slits of their eyes,
and I stared them out, shot
and bombed and stared them out.
Slowly, we emptied ourselves,
soaked into the beaches,
washed between each blade of grass.

Posted by Gregory Leadbetter at 12:04 pm

Unknown said...
This comment has been removed by the author.
4:41 pm

Love it - so evocative

how to celebrate bhai dooj