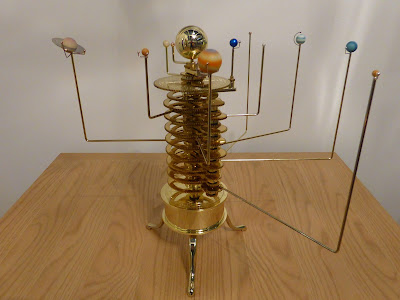 My father was a keen amateur cosmologist. For years, the New Scientist (and somewhat less frequently, Nature) would accumulate by his favoured armchair in the family lounge, grist to the mill of his own theorising about the universe.

After taking early retirement from his job at British Telecom, he began a degree in Physics and Computing, so that he could conduct his own experiments - often questioning received orthodoxies, such as the Michelson-Morley experiment on the existence of the Aether - or working on his own idea for a gyroscopic space drive. He was fascinated by the work of Brian Josephson, of Trinity College, Cambridge, on the Mind-Matter Unification Project. I still don't know what may lie waiting to be discovered among his papers.

Some time in 2010, he ordered and started to build an orrery. These are beautiful things: animated models that illustrate the relative motion of the planets in our solar system.

By January 2011, however, after only getting as far as Mercury - i.e. the first planet from the sun - he stopped building it. It was around this time that he showed me the full set of planets and gears that he had acquired - but it was also implicit, in the way he spoke and handled them, that putting the rest of the orrery together was indefinitely deferred.

Eventually, we realised that he had stopped building the orrery because he no longer could. Although it would be some time before the diagnosis came, he was suffering from vascular dementia. The loss of his ability to construct the orrery - in a man who used to build his own computers - was a symptom of the disease.

My father died in October 2013. The unfinished orrery passed to me.

In December 2015, I at last took it upon myself to finish building it - a bridge from his days before the disease to the present, and a kind of afterlife for something of his, and of him. I finished it on Christmas Eve 2015. And it is indeed a beautiful thing.

So, to mark the completion of my father's orrery, which he began and I finished, I'm posting here a poem about its incompletion, which was first published in The Poetry Review in Spring 2014. It will be included in my forthcoming collection with Nine Arches Press, The Fetch, which will be published in October 2016.

is without end.
The solar system on the fireplace
spins only one planet around its sun –
Mercury, as if now the limit
of what we know, hints at the missing
planets to come: the ache in the equation
their absence makes, the skewed gravity
at work in the hand that hoped to build
a thing of beauty, week by week,
as the advert said, adding to the stock
of wonder. Just a con, they are.
Hasn’t he got better things to spend
his money on? But I shared the secret
of his joy in those spheres, his maths
by intuition, the theatre of their relative
motion. He showed me the unopened packets,
the grub screws, nuts and pinions of it all,
and there, the planets themselves:
Jupiter, heavy as antique gold,
the ball bearing Earth, Saturn with its halo.
A look of recognition crossed his eyes –
yes, that’s them – but out of orbit,
no force to order and bind them
to the weave of their ellipses,
to turn the key of the space between
and spring them in the cradle of their star,
without which, they rattle and fall.
With the planets in his hands, he felt
the weight of his loss, knew he had forgotten
how to put the universe together.

Posted by Gregory Leadbetter at 6:52 pm